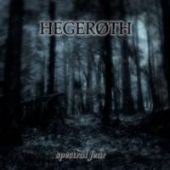 Buy on: Bandcamp
Type: Demo
Release Date: 2012
Label: Self Released
Genre: Black, Melodic
1 Rot For Me
2 The King Of A Morning Star
3 For My Desires
4 Queen Of Latex
MetalBite on YouTube

Hegeroth as a band started in 2010. “Spectral Fear“ promo was self recorded, self financed and self produced in the beginning of 2012. Not a small feat for a band with a two year lifespan, especially if you consider that they are from Poland. Doing such things over there even with a sponsor with a fat wallet may shorten the life or kill a good and ambitious band, and yet these guys pulled through.

There are four songs on the disc and guys are in the process of constructing more for their full length release, which I hope will come in the near future. I can’t say that I never heard anything like what they do before but yet their enthusiasm, their drive and obvious affection for Black Metal was infectious enough to keep me glued to my chair all the way through. It got me to the point where I was listening to it over and over. This is Black Metal with haunting keyboard themes all around, with rumbling (even though sometimes ’hidden’) bass, raspy sulphuric vocals and very inspired and solid drumming. Songs are well constructed for such young ensemble, and flow easily from one to another. Recording and sound are done so well that both are something that needs to be mentioned here. The reason for it being the clearness and sharpness of both which adds tremendously to the listening experience. Hats off to the guys in the studio. I’ve also noticed that even though music is simple, every time I listened to it - I was finding a new element or hidden melody. Not something unusual for experienced bands but those guys are not one of those just yet. Very good way of addicting new listeners I must say. From song to song riffs and drumming, keys and vocals, melodies and the atmosphere are at work to keep listener curious, there is always something going on to keep raising the interest and there is always something to push the hook deeper. I wonder what they will think of next since they have done so much already. Can’t complain much about anything on this disc, and even though I hope for the keyboards to be moved a little to the back to give more breathing room for guitars and drums to speed up and be exposed tiny bit more, I have to say I like it much.

We try not to review demos. Promos get very little if any attention around here. The thing is: I could simply toss the disc in the box and forget about it, but the truth is - I could not pass by Hegeroth without giving those guys the thumbs up or, more appropriate here, double horns up! That was one of the better promos I’ve heard in a long while and I’m planning on keeping an eye on those guys. I believe they’ll get far if they have more of the persistence and keep the drive which I mentioned above. You got a friend, fan and a supporter in me. Don’t fuck it up!!!