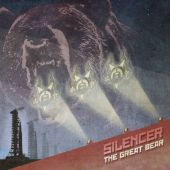 A great concept can make a album from the first strains come alive and engage the listener with expected enthusiasm. It sets the mind to go into the songwriter(s) inner world where every note and lyric had been born... so they can experience every last little bit of what the creator of the song needed.

Colorado based Silencer (not the Swedish act of the same name- not style) has been around for fourteen years, pounding out some nasty metal from the start. Starting off as a Power Metal act, the band over the years has shifted and changed to keep their original concept, but add in some nasty end of 80's Thrash, some same 80's Speed and even a little Prog thrown in as well. With that corrosive mixture of that music, this album is topped off by lyrical topics of the whole space race between the old Soviet Union and the USA during the 50's and 60's , but told in a completely alternate sort of twisted alternate reality. The final product comes out as pure metallic art, and utter ball busting POWER.

Gotta say that I was blown away by the musicality Silencer brought out of themselves, not to mention the brutality of the riffs that constantly leaped out at me. Such pieces of pure brilliance like ‘I am Thunder!’ and the title track rip the cover off of Thrash and reworks it into passion fuelled that adds to the whole Thrash thing. Some of the shorter segway tracks add a whole dimension to it as well and make this new rendition of Thrash leap into our century.

I listened, I liked, I thrashed. That about sums up what this album brings. This is Thrash amped up and unleashed - any metalhead... mosher or not... will appreciate and get behind this amazing band. They may not be ‘silent’... yet they are deadly.