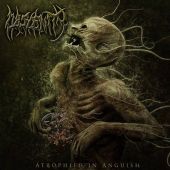 Just the other day, I was sifting through my CD library and pulled out Obscenity's Suffocated Truth CD and spun it with great delight. I've always loved these German connoisseurs of death metal. They've never really disappointed me with any of their releases since 1992, especially with the first two (Perversion Mankind being the second impossibly-located release). With 2012 coming to a close, Obscenity issues another chunk of decayed meat in Atrophied in Anguish through Apostasy Records.

So the first track begins much as all of Obscenity's albums do with discordant chords of fury with some truly volatile vocals spitting forth venomous anecdotal verses designed to really infect your head and muck up your day, in that order. “Erase the Divine” pretty much lets you know that the next 35-plus minutes are going to be a severe kick to the spine. Musically, Obscenity’s entire lineage is staunchly intact, with punishing riffs and disturbingly violent drumming to quell the rabid fan's thirst for bloody musical discharge. With the recent rash of deathcore bands doing everything inhumanly possible to destroy the proud history that is extreme metal music, when some of the past masters come around and slap down the minions it's always a fine experience. Atrophied in Anguish does this and then some.

Look, this record isn't going to make them a household name because, frankly, relative anonymity is part-and-parcel with this music, but you might find yourself seeking out the back catalog with some ferocious abandon (and good luck finding those first two CD's for less than $250 a pop!). These tracks are slabs of meat, well refined and tenderized, to gnaw on while pondering the future of the planet, or simply to enjoy some very solid death metal music from a formula long bastardized and trivialized. “Neurotic Frenzy” is one of the most ferocious tracks I've heard in some time that didn't have all sorts of medieval jargon, musical or lyrical, attached to it to make it seem so much more epic than it should. This is also evident in all of the other tracks on the record, especially “Hysterical Illusion”, which is about as old school German DM as it gets. That sick tremolo picking in between verses is everything about the genre that should be kept sacred. “All You Can Kill” sets the pace for the CD with its fast, unbridled hate literally oozing out of the amps. This track has really become my favorite on this CD; the way vocalist Jeff Rudes hisses the title is one of reasons Obscenity, at the 20-year mark, is still a classic underground unit from the other side of the Rhine.

Production-wise, Atrophied is a thick, accentuated collective that sounds about as good as you want it to while retaining that primitive vibe throughout. I have no complaints there. I keep thinking of how fast this music travels with such precision and still leaves an incredible impact on me after I've stopped the music, and that feels good! Death metal, contrary to popular layman's beliefs, is not meant to incite violence or rites of lashing out at a 'normal' public. It's designed to open the mind, cause moments of deep introspection, and, basely, to entertain the hell out of you with some of the most brutal musical notes the bands can assemble in somewhat orderly fashion. It's certainly not for everyone, right?

Good. Not everyone deserves such brutality at face value. But hey guys, how about some reissues of those first two albums for our younger friends in need of a fix?

I just came off of a Power Metal high, going to see an up and coming act here at home that has not even recorded a demo yet, and I was still jacked up. Deciding to do a review or two to wind down was just the ticket for me. I brought up Germany’s Obscenity, a band I had heard of, but not listened to until I clicked on it.

I was struck by the power of this band, as pure Death Metal seared out of my speakers. This was not Euro or Scandinavia Death Metal, it was revved up form of Floridian Death Metal at its finest. Fiendishly heavy riffs, atomic drumming and thunder clap bass lines, Obscenity takes this American styled Death Metal, and put into it their own spin and shoot out some of the impressive Death Metal ever.

Picking any track on here would make anyone a believer in the band, so much so that I can't write it all. Songs like 'All That You Can Kill' and 'Swine To The Slaughter' show a band that is so musical in its approach to how they write their songs, but they bring that wonderfully heavy and over the top viciousness as well.

They have taken the whole Floridian Death Metal thing, added in their own blood and sweat, and have made it their own. I have now heard Obscenity and became a fan within the time it took to listen to it. Now it is your turn to do the same. I need you all to hear this clearly, Obscenity is the new benchmark for Old School Death... don’t be tardy for it.