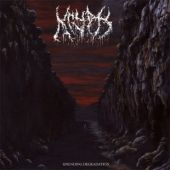 Out of Dark Descent Records' extensive past and present roster containing some of the most visceral and cryptic death metal bands in recent memory, it's hard to pick a favorite, especially after being spoiled rotten with bands like Hyperdontia and Sulphurous and their riffy, putrid sounds. However, Krypts was probably the first one I heard and I fell in love with the otherworldly atmosphere and subturranean crunch almost instantly. The demos as well as the full-length albums recaptured everything that made the Finnish death metal scene of the early 90's so special, despite being unknown at the time unless you were actually there.

What a sentimental yet emotionally obscure unearthing the debut album Unending Degradation really is! 'Open The Crypt' indeed, because it feels like that's what one would need to do in order to acquire a fetid gem such as this one, having been buried for centuries in the deepest crevice of the most unnerving slime caverns...

If you've heard even a bit of cult gems from the country of Finland like Funebre, Abhorrence, Rippikoulu, Unholy, Depravity, and Purtenance, it should be abundantly clear (or murky, rather) what you're getting into as soon as you take one glance at the oppressive cover art for Unending Degradation. The first four tracks alone would make up a flawless 1990-93 demo/EP tape alongside "Cranial Torment", "Silence Of The Centuries", "Vulgar Necrolatry", "Wrath From The Unknown", "Musta Seremonia", and whatever else have you, but Krypts' first demo already did something similar, so we get a full album!

Holy fuck, for how "murky" this death metal is, the riffs are very distinguishable. 'Open The Crypt' is one of the most notable modern death metal songs for this reason, as it's got this really intense mid-tempo groove to it as I recall. One could also point to the sludgy chugs and gallops in 'Dormancy Of The Ancients' for a sense of how the music here drives like a sturdy vehicle built low to the ground. That's important because a lot of death/doom or whatever that tries to be funereal with its atmosphere just isn't so, because it doesn't have that driving oppression, the riffs just kind of dirge in place with no purpose behind them. Sure, there's melodies but at that point it's just kind of ineffectual. Not so for Krypts! There's the right touch of melody, mid-tempo crushingness, (the bass tone is fucking gnarly too!) and overall careful selection of which notes to play regardless of what tempos or time signatures are at hand.

The drum fills too, they add so much more pacing to the music in much the same way Andy from Bolt Thrower would've done. 'Dormancy Of The Ancients' is the best example of this tendency executed at mid-tempo, but in moments like the beginning of 'The Black Smoke' or the verse of 'Day Of Reckoning', that's where the drumming feels utterly relentless yet catchy. This segues into the next point which is the vocals. Guess how they sound. Deep. Deep, guttural death growls that carry what could be described as emotion, but is more accurately explained as "mood." A really sinister, tortured, and vaguely hateful tone to these death growls, and the darkly melodic, gut-busting music substantiates this feeling.

Lastly, not sure where to put this but 'Beneath The Archaic' is the perfect closer to a damn near perfect doomy death metal album. Everything about it feels so culminative, the haunting melodies and drudgy feel especially. There's that kind of slowed-down, chunkified Bolt Thrower/Benediction charge to some parts of it coupled with tremolo attacks, but the distinct minor-scale progressions lend it a way more menacing feel, rather than Bolt Thrower's sheer badassery. Along with 'Dormancy' this has to be the highlight of the album.

If you are looking for a cherry to top off the unnerving and cryptic music of the Finnish death metal scene, then look no further than this band, Slugathor, and Corpsessed for your fix - each of these bands offer superb and inspired Finndeath all their own across their few albums, and in reviewing Unending Degradation I have a chance to say what makes this circle such a likable snapshot of the greatness of cryptic death metal. Check each of these out. The newer Purtenance albums are also damn good.