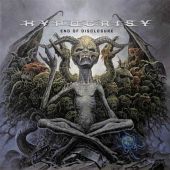 I'd say that this one hits the melodic death/doom metal genre given the atmosphere of it. The keyboards make it into an eerie, sort of gothic vibe and the vocals go well with the music. A lot of really slow tempo songs and entirely melodic and depressing. I suppose Peter's aim is to hit the cosmos with his sci-fi lyrics and guitar riffs that bleed on a deathly doom mixture. The whole album is really filled with songs that just crush minus the aggression factor. I think that the guitars/keys/production sound quality was superb and no complaints on those ends. The music is what's key to me on a release, but if I could relate more to the words, I'd appreciate the album more.

I think that the most intrinsic points of the album are the combination of death-like vocals mixed with screaming plus the crunch tone on the guitars are riveting. It sets it aside from newer bands that are in the melodic death scene. There really were no super high intensity guitar playing or much lead guitar work, just mainly rhythm backed up by the atmospheric keys. There wasn't a song on here that I disliked, I think all were an invigorating, epic and melodic guitar with degrees of utmost sound aura. I think that this was the main focus Peter's concept for the album was to be.

The production quality was in the superior category as usual and everything seemed to fit together nicely. Horgh from Immortal is behind the set on this one. An excellent effort by all musicians. I'd say the high points of the album was definitely the music in general, nothing too innovative here though, however, nothing that was overtly striking. Some good tracks to check out are the title-track and "United We Fall", but I'd say pick any track off here and its good melodic death. The riffs didn't stick with me that well, but on repeat I seem to hear everything little thing that's different that I didn't hear before.

End of Disclosure is a laid-back melodic death/doom release with excellent atmospheric work (as previously discussed) and it deserves to be looked into. For me, the highlights are the guitars. They're so epic and lucid, with a conglomerate of melodic guitar to the core. This one though is like a transformation for the band. They've really mellowed out as age does, but still the music is quality. There are tremolo picked licks (which encompass a lot of the release), bar chord heavily muted chunky sounds and an immense doom with those keys in the background.

Be sure to listen and judge for yourself how this album sounds to you. I think that it's quite good, just a little bit short of a masterpiece. I didn't like the lyrics much though, I think that the sci-fi words aren't thought provoking enough to me. But the music is just so darn good which makes up for the lack of ingenuity in lyric writings. Definitely an album to check out because musically its original and mild. Nothing too intense, just mainly atmospheric. Peter I think was shooting for something good here in the songwriting portion, but if he could've made the lyrics easier for the listener to relate to, I would've given it a higher score. However, pick it up!