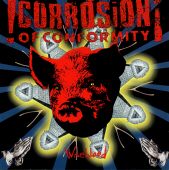 Its CoC back again with some more blistering hard rock and roll. This disc, like most of CoC's work, has its moments and some of it is actually pretty heavy! This disc also has a lot to offer to many different kinds of rock fans. For example, take the song King of all Rotten. This song definetly has a hint of some old style grunge while adding a bit of bluesy hard rockin flavor to it. And for those headbangers out there, the song Fuel is definetly the one you would be most interested in. The standout on this disc goes by the name of Drowning in a Daydream which seems to be this band's cry for mainstream radio if you ask me. All and all, this cd is not all bad to be honest with you. The album serves up enough catchy riffs and choruses to make it at least mildly entertaining.

Bottom Line: Looking for some good old fashioned hard rock with a small amount of heaviness to it, then look no further than CoC's Wiseblood!