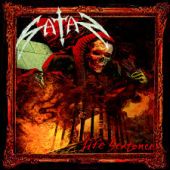 Some legends never die…they just find a new audience and bring the NWOBHM right back to the forefront where it deserves to be heard by a new audience of fans. Satan strikes out again with their latest album, Life Sentence, and it’s a hellish crossfire within.

For a 26-year layover, save for two live albums and two compilations in the interim, Satan hasn’t missed a single step, and when you hear the first notes of “Time to Die” that’s innately evident. Once that verse riff kicks up the dust and that clear vocal comes soaring over, it’s like 1984 all over again. Without the material sounding dated, Satan manages to take traditional heavy metal to a logical plateau. The album has a magical quality that transports us old folks right back to that wonderful period, yet it can impress and entertain the youngest metalhead fit for history lessons from the old guard.

The wonderful richness to Brian Ross’ vocals lends to such a natural purity not found in many forced efforts or studio trickery these days. The genuine power he emits with seemingly no effort is the very stability that made Satan one of the better bands from that historical era. When listening to this album the second time around I feel a real sense of nostalgia, sure, but I also hear a lot of true heavy metal riffing and structure that will resonate through every generation of fan if given the time.

“Cenotaph” is one of the strongest tracks on the record with its extremely strong verse riff and really speedy delivery. It’s really a pleasure to hear bands of the early era, no matter the genre, sticking to their proverbial guns and not giving in to a demographic that might otherwise change their entire sound for the sake of monetary or generational (im)balance. The borderline speed metal that sets Satan above many peers of the NWOBHM milieu is still scattered copiously around the album, but it’s the slower, potent chunks that really stick in my head. I’m thinking anyone that likes this traditional style made popular by Judas Priest or Iron Maiden will enjoy those moments as well. If you can listen to “Another Universe” and not hear some Maiden in there, you’re in the wrong genre. This is one amazing track with its perfect vocal melody and some of the best guitar work I’ve heard from a traditional outfit in a while. It’s generally hard to keep this style fresh and interesting, but Satan has no worries here.

Without relying solely on the old schematics, Satan issues a thick production with these tracks that was otherwise unheard of back in the days of Suspended Sentence or Court in the Act. It works so well throughout and adds a very modern feel to their style. The track that really calls out some early Mercyful Fate tones is “Incantation” with its vocal melody and ascending bridge riff that is a familiar element in some of the early Danish legends’ arsenal. Yes, I managed to compare Satan to Mercyful Fate.

Another strong element to the record is the lyrical content, which doesn’t bother with a myriad of fantastical images that fly fast and furiously past your eyes like a highway ride in the car while gazing out the window. The images themselves are the selling points, especially in the title “Life Sentence”, which is Satan’s essence in a musical nutshell. All over this release there are some really introspective moments to ponder without boring you to death as I may have done with this review.

Without burying the point in a lot of rhetorical banter, Life Sentence is a return to form for Satan, a band known for issuing strong, somewhat blueprinted albums on their own terms and by their own rules to an appreciative fan base. This can certainly be an album you’ll pull off the rack again and again when you want those heavy riffs to swim around your head, drowning out the world and its horrors and labors.