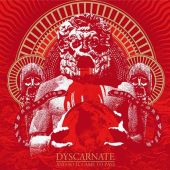 ::   ::
Type: Full-Length
Release Date: 2012
Label: Siege Of Amida
Genre: Death
1 The Weight Of All Things
2 In The Face Of Armageddon
3 Cain Enable
4 A Drone In The Hive
5 Engraving Ecstasy
6 The Promethean
7 Grinding Down The Gears
8 Rise And Fall
9 Seizure
10 Kingdom Of The Blind

There are no changes to the effect used on guitar, it has the same crushing distorted sound, yet all sounds can be heard perectly clear, same with bass guitar. And drums work perfectly with rhythms used for riffs, no matter how complicated, they remind me of Gene Hoglan, mostly thanks to very complex bass drum work and cymbals which sometimes make you ask yourself "does this guy have a third hand?". And I really like how sound of guitar and bass make the sound complete and they both execute wide variety of riffs and chords. And both vocals work pretty well together, with guitarists growling being much lower, more stomach-based, while bassist's growls are probably more lung-based, sometimes getting close to Black Metal shrieks, which can be heard on their live show more clearly.

Overall very interesting album with very good ideas and executed with pedantic precision, but not at all boring. Since I always like solos in track, I have to say that even though this album doesn't have any it doesn't need any. I guess the band which is closest to their style (at least from the band's I've heard) Krisiun is the closest. But this album is really original, with great ideas and perfect production. And it's perfect 10 to me.