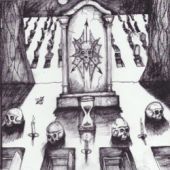 Yes, you've heard me say it a thousand times about black metal being this shell of its former self. While I staunchly stand behind that statement, this new-era of black thrash popping up flips both sides of the coin on rare occasions. Most of it is cheap Hellhammer or Bathory lo-fi rip-offs that are just laughable in both imitation and design, yet in that cesspool of plasticity emerges, every so often, a rare jewel that captures your attention and just lulls you into a submissive sort of acceptance simply because the music is interesting and entertaining. There is no fuss or muss, no frills or bells and whistles - it's just solid music that you remember and revisit, nothing more, nothing less. That's what it really should be, after all.

When I heard Chicago's DeathCult last year by way of the demo CD making the rounds I was immediately impressed with something so simplistic and yet so disarmingly heavy. With a sound steeped largely in the thrash side of the metal spectrum, the edges are tainted so perfectly with a black melodrama that leaves both sides of the fray satisfied. There is nothing here that will cause you to fall off of your chosen seat and claim technological advances so insane that the medium is revamped; what you are treated to in Test of Time is 'typical' black thrashing metal ala early Sodom, Venom or Celtic Frost, only with a rare magic wand for production and fine attention to tightness of material. Whereas the founding fathers were levelers of this now soiled and barren road, the sloppiness was part of the charm and quite easily ignored. Main man Tim Pearson handles each instrument with decided care and sharpness all too often dismissed for that “KVLT” sound. I like when a band finally realizes that to keep the tradition going doesn't mean using the same outdated sound(s) and/or equipment to make a decades-old point. That's why DeathCult is something to behold.

Test of Time is what you expect in an album of modern era blackness: it encompasses the sound traditionally held dear by Swedish or Norwegian hordes, but it's vastly more polished (without giving way to total processed cheese) and crisp around the edges. The music Pearson creates is heavily influenced by both past and present masters, steeped firmly in the expected sound associated with blackened thrash, all the while recapturing a buried feel of speedy anger and bleakness. I personally loved the demo and had high expectations for the full-length, and Test of Time hasn't let me down. With the heavy-handed “Born to Lose” and “Mutant Generation” still ringing in my head from the demo, I'm also completely taken in by “Hail the Antichrist”, which is about as volatile as anything Midnight or Sarcofago can respectively issue. It's a chugging, riff-mongering entry that can just as easily sound like an early 90's Stockholm effort as it does a south-side Chicago effort. If the feeling is there and the ideas are rampant, magic can be created. Pearson's breathy growl ala early Tom Angelripper only adds to the aura generated around this music. It really is a solid undertaking. Songs like “Doctrine of Hate” and “Forms of Things Unknown” call upon ancient influences and ground-breakers for unholy inspiration, and it's delivered without flair or unabated musical sarcasm at the fan's expense.

As I mentioned, the production is really good in regards to the music style; you really can't over-polish any thrash without it becoming a lame and pale imitation of that coveted 1980's sound; add to that mix a black metal vibe and the results can either be just fine or a colossal disaster. Thankfully Pearson manages the former by letting the music simmer in its primitive feel with some modern devices utilized only for clarity. In this day finding any really memorable metal music with 'black' edges attached is a crap shoot; you can either be pleasantly surprised by new takes on old ideas or you can fall to your knees and curse the gods for allowing this blasphemy to go on uncontested for far too long. DeathCult will keep you happy if you understand the history of the medium and embrace new and vital homage to that sound.

Without breaking any real black thrash metal “laws” DeathCult's Test of Time provides a pretty sickening soundtrack for any given evening when a rushing flow of blood is required to attain a true feel for both eras of this genre. It proves some positivity can be had from an antiquated heavy metal guide's most heralded sermons.