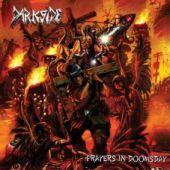 Brazil has a good history of giving the world some pretty fucking good metal over the years. Sepultura, Volcano and Mutilator to name a few have come out and pounded the world with its more extreme edge of metal. Now we have Darkside who want to follow in the Headbangers footsteps.

Playing some straight ahead Thrash Metal that has links to the whole American Bay Area styles. Sounding close to early Exodus, early Slayer and even Testament with some of the melodies seemingly ripped from Overkill’s playbook. It seems these Brazilians have the deepest passion for creating some infectious Thrash, have the ability to play it with blistering precision and yet never seem to define their own originality in it.

On listening to the album, one thing was clear. This was recorded amazingly while keeping the roughness needed for that Thrash feel. Songs like 'Bubonic' and 'Crossfire' are classic Thrash. Tight, fast, mean with razor sharp solos and gruff vocals. The songs are good, but because the melodies and some lines come so close to many songs that seem to be from the masters of Thrash rather than exploring a path where their style may live, seems to me like Darkside might have played it extremely safe rather than making their own thrashy blueprint to make it there own.

I am a old thrasher, but Darkside’s music is too close in sound and style to all of the gods of Thrash for me to overlook. I liked what I have heard, but if I wanted to hear Bay Area Thrash I would pull out my collection and hear the masters at work. These guys have fucking talent underneath the near cover type of attitude. If they can find their own style of Thrash and perfect it they might be the next Exodus and being the genre to the next level if they can follow their own talents. Right now they sound like a Bay Area Thrash tribute that has pasted in some new lyrics.