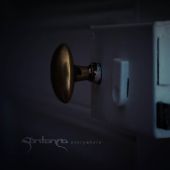 I've read comparisons to Death and Cynic in few reviews for this album. I would probably add some Pestilence between "Testimony Of The Ancients" and "Spheres". So these are the basic similarities which first come to mind.

The growling is a little lower than in all those mentioned and sometimes you can hear harmonies similar to Behemoth when it comes to mixing growling with clean vocals, done quite well. All tracks here are compositions quite complex, mixing many styles and melody lines. Thanks to musical skills of guitarists and bassist you can also hear many calmer passages which definitely remind of Death, especially last album. Guitarists use even the same guitar effect during some of their solos, but there is a solid amount of harmonies used in Cynic. It seems France is quite good place to produce bands which like to experiment (I'm still waiting for Symbyosis to wake up from hiatus, Misanthrope is also good example). And because of the mixture of various tempos and musical styles this is not the album to be fully heard for the first time. I just realized that quite similar effort was made by Polish band Sceptic, so if anyone likes this kind of metal mash, this is a position I would strongly recommend. Is this album lacking anything? Bearing in mind that it's the band's first full album this is definitely a successful attempt to record such complicated material. And I guess if you have so many ideas for riffs and compositions, the choice to choose the right ones and melt them together in one album is a hell of a challenge. I would personally prefer to hear more catchy passages and some riffs were just screaming to me "we are the perfect background for an awesome solo!!!", but the solo was not there. And definitely musicians need more courage in using some elements which are used just once or appear for a tiny amount of time as if the band wasn't sure if it sounds good.

Piano in 'Everywhere Of Nowhere'? Yes, perfect choice. Keyboards in 'One Day'? Awesome. But leaves an unsatisfied hunger. It's like eating just one Twix or watching "Flash Forward". But I definitely look forward to their next album and hope there will be more.