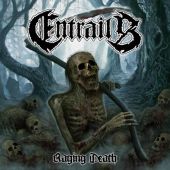 After signing with Metal Blade Entrails has finally achieved the major label recognition they so richly deserved after two stellar full-lengths in the Tales from the Morgue and The Tomb Awaits. Hitting the coveted trifecta, Raging Death tries to add yet another Swedish slab of sickness to an already impressive discography.

As evident on The Tomb Within, Entrails takes that ancient Swedish death metal sound and couples it with a crisp, thick production that adds elemental intensity to the effort. This is one of the things I truly enjoy about Entrails, not to mention the death metal brutality that appears so effortless and ugly. “In Pieces” lets you know right off just what to expect when that growling froth spews forth amidst a torrent of expansive guitar riffs that leave welts and bruising with hideous perfection. Some might argue that this sound the band offers is nothing really new, and they may well be right. However, with many of the forerunners of the genre, namely Grave, Sorcery and Entombed, leaving deep tracks to follow it’s no wonder people are clamoring for this coveted sound some 20-years after the fact. I suppose the simplicity and familiarity in the sound makes Entrails all the more engaging since this type of death metal still commands and audience after so many years in devious delirium.

By the time I hit “Bloodhammer” I’m fully at the mercy of the Scandinavian sickness once again, recalling how I felt when first I encountered these horrid chords that hit my sensory ducts like a wet bag of wrenches so many years ago. While Entrails began an unearthly existence around the same time as many of the main players we know and hail today, the band lay dormant for nearly 20-years with all of this raging violence sitting on shelves, both mental and musical. Introducing a new generation of fans to the likes of “Death League”, “The Cemetery Horrors” or “Chained and Dragged” can only give the genre a much needed jolt, and the youth deserves to hear this music done with such attentive perseverance. The galloping riffing in “Headless Dawn” is precisely the ingredient necessary to instill that desired feeling of volatility and rage in any true death metal fan’s heart. This is that classic sound in every facet.

I will admit that The Tomb Awaits hit me a bit harder upon first hearing it; it was definitely a first-time piece of magic that astounded me all around. While Raging Death is just as potent a release and a fine example of what Entrails is all about, it does seem somewhat less volatile in certain areas. This is not necessarily a downer point with regards to the album’s tenacity but more of a casual observance. This album still houses some heavy moments of hellish delight, especially in “Descend to the Beyond”, where the main verse riff just rambles around your head with all subtlety tossed out the proverbial window. Another great element to Entrails is the vocal enunciation that allows the lyrically-enslaved among us to enjoy all of the filthy phonetics we can stand to be clearly stated and enjoyed like a raw meat buffet.

As for the overall mix, the drums are really nicely presented as are the guitars, while the bass seems to be a bit lower in the fray. There are really no complaints to be had from this fan, so hopefully you’ll find something encompassing here as well.

Raging Death, in its basest form, is an album that represents an historical period that always finds itself rejuvenated at the best possible times. When you think all is lost and the death metal genre no longer has life, it makes its diseased presence known in releases such as this so we know just how good life is with the tattered web of death looming in every corner. It keeps us all entertained and humbled.