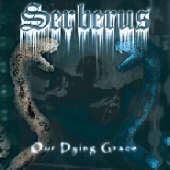 A whole mini-album for just one newly-composed song? The title-track shows nothing more in musical growth than they can now afford better amps and impressive studio production. The re-done forms of 'Dark Dream' and 'Ancient Throne' are just the same, if not worse, than the original versions. Guitars are over-harried with feedback and rough distortion which ruins 'Dark Dream' by deforming the great melody lines. 'Ancient Throne' somewhat benefits from the monstrous distortion and it ends up sounding more rough and sharp, but this time the feeling is lost and the song doesn’t draw you in and keep you enthralled, but rather pulls you along at a trot.

The one track that really gets things going (although it’s already a bit too late to salvage the album) is Destruction’s 'Curse the Gods' cover. Here is some real quality music, raw, fast, brutal thrash metal and Serberus have done a superb job on it. This is their niche, this is what they should focus on, since it seems they don’t have much melodic potential. Forget about "Melodic, Aggressive, Death Metal", if I want that I’ll put in Dissection or Children of Bodom, Serberus are "Fast, Aggressive Deathrash".

Now here’s the part that I loved! The CD is not only a record, but a CD-Rom, featuring a very impressive multimedia section that’s got two live videos ('In Eternity' and 'Gates of Fire', impressive performance!) as well as reviews, interviews, bio’s, disco’s, lyrics and everything else you never wanted to know about the band. This brings up the quality of the whole release quite a bit but I’m not pissed either way, they sent it to me free, fine marketing strategy, guys! However, you won’t get to do it once you’re signed!

Bottom Line: Unoriginal but still interesting black-death-thrash. The new versions of old songs were pointless, as the old ones are still better.