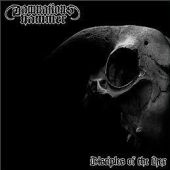 Type:
Release Date: 2012
Label: Self Released
Genre: Death, Doom
1 Defiance & Retribution
2 Throne Of Fire
3 Disciples Of The Hex
4 Serpent’s Wrath
5 Impaled On The Horns Of Betrayal
6 Harbinger Of Darkness
7 The Hex II
8 Gates To The Necronomicon

I was never expecting to get to review an album by a band from my area. But here it is and it's a very good Doom/Death album. Damnations Hammer are from Lancashire and their album "Disciples Of The Hex" is a very good representation of the genre, according to IHate "taking influences from the likes of Celtic Frost and Candlemass". The CD I was listening to was a re-issue done by for IHate.

I love the sound of low-tuned guitars, the bass is only slightly distorted and drums have a very good echo effect added which enhanced to dark, gloomy atmosphere in the album. Going back to style - it does remind of Celtic Frost, but fortunately to me, not too much. I know it sounds like a blasphemy, but I've never been a huge fan of Celtic Frost and their only album I like is "Monotheist". And that's probably the echoes of this album that can be heard on this release that I really like. But to decent degree. I have to agree with IHate's description, that there are elements of early Candlemass here, which adds more melody to DH style. There are slow, doomy tempos, but you can also find slightly faster passages, more thrashy. And very good solos, fitting the overall character of the album.

The vocalist's way of singing reminds me more of American Thrash Metal bands, quite old-school melodic and clean. And this is probably the only thing I had to get used to, because initially I would think that the vocals are too clean, too polished for this style, but the longer you listen to this album, somehow it starts to fit and now I think this is good detail distinguishing this band from others. And to be honest I've been attracted by this release first when I read about the lyrics - loosely connected to writings of H.P. Lovecraft, but still dark and grotesque, just how I like it. Sometimes the vocalist decides to switch from singing to declamation, which increases the depth of the lyrical layer of the track and works great for example in the track 'Disciples Of The Hex' (there is a video available for this track on the band's website). Great track, with basically all elements which are great on this album - doomy atmosphere, dark lyrics, brilliant solo, exposed harking sound of the bass and the whole spectrum of vocalist's abilities. My another favourite track on this album is 'Impaled On The Horns Of Betrayal' - starting with the fastest tempo on the album, then slowing to mid-tempo thrash riffs, to slow down even further in the middle and end up with the fast riff again. At some point some riffs reminded me of Prong as well.

Basically very good dark album, but also varied in style and dynamic. Very interesting position and especially that it's the band's first full-length release, they've managed to stand out in the genre. And to the two tracks mentioned above I would add 'Throne Of Fire' to my favourites, probably mostly thanks to great solo and good headbanging tempo. Abandon all hope and surrender to disciples of the ancient hex...