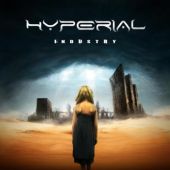 "Industry" is a Heavy Metal album that does have ties to Death Metal and Industrial music simultaneously. It makes for an effective mixture, especially when a progressive build is given to the overall framework of the work. This short EP makes use of a great deal of production to enhance the mood of guitar pummeling that is used throughout.

There are some furious riffs, but also this method of giving enhanced sound to the instruments makes the songs feel epic in nature as well. Musically, the band is sufficient, but doesn’t bring enough new to the table within the innovative scope of their music. The build-ups in their music create moods to the listener that might be hooked if they complex song structures like Meshuggah or Gojira. They are quite good in the instrumental department, bringing an aggressive standpoint in with talented drumming and background noises, like those found towards the end of 'Toxic Secretion Of Being'.

Since "Industry" is only an EP, I’m curious as to how much potential the band precisely has. A six track disc is good enough to get reasonably high appreciation of the disc, however. I think Death Metal fans would want to use this as a teaser too, because they might be a stronger outfit when more cohesiveness is brought in with the album as a whole. I think Hyperial has potential, but they need to make an innovative concept that will work as an entire album next time around. This is still very good material, however.