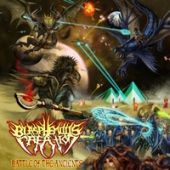 This album has an odd blend of sounds in that it there is a combination of straightforward Death Metal with a classic sound that hearkens to the days of Manilla Road or the Thrash of Kreator. There is a great improvement here as the band has added depth to their sound in comparison to their previous album, "Diabolical Kingdom".

The song-writing is clearer and it is easier to understand their ideas this time around. Originality is still not the strongest aspect here, but the solid musicianship makes up for this short-coming in spades. The very old-school vibe of the music on this disc is what gives it a life and personality of its own. The eighties thrash scene obviously had a huge influence on the band’s sound because they bringing staccato riffing from that genre to the forefront. Check out 'The 12th Planet' or 'The Final Battle' for examples of the Thrash riffs put as the center of attention. One could also liken their riffs of this type to Immortal or Black Metal bands of that nature. There is a strong sense of energy and compassion brought forth with the music of Blasphemous Creation this time around and it translates to a winning formula. The whole album has few down points as the emotion the band creates is always entertaining at the very least.

"Battle Of The Ancients" was odd because it brought to mind Thrash, Black and traditional metal as much as it did Death Metal throughout the large majority of the release. This means a lot of Heavy Metal fans that like different genres, but especially the classic scene, will find something to like here. The galloping nature of the music as it traverses these different genre is always fun and well-constructed enough to be appealing.