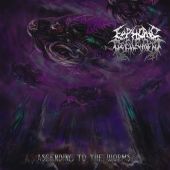 Well, this is quite intense album. The simple, right-in-your-face Death Metal. Mostly reminding of Cannibal Corpse, maybe a little Katalepsy but no solos, just low-tuned guitars, very distorted vocals, violent blast-beats. If you're looking for a fast, brutal but simple Death Metal, this is an album for you.

There is some intro, 'Echoes/Deprivation...' is a track with some instrumental introduction, 'A Peaceful Decent' is an instrumental track, but mostly it's just pounding your ears with merciless wall of riffing, ruthlessly beating your brain with sheer American school of Death Metal. Interesting lyrics and definitely quite good production for debut album - the sound is clean, but guitars are well distorted. I deem it as a decent effort for a first full album, but having listened to few debuts this year already, I was expecting something more.

Maybe I'm just not a fan of pure Death Metal without any additions. Can the band play Death Metal? Hell yeah. Are they able to bring something new to the genre? Well, hopefully we're about to see in the future...