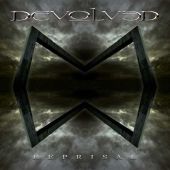 Through a very industrial sound, Devolved is able to push the driving force of their riffs forward. This is an album that sounds like either Fear Factory or Strapping Young Lad in this nature. The songs aren’t the most complex ever and maintain some straightforward guitar patterns. The band has a ferocious nature that will appeal to a number of Heavy Metal fans. The more Avant-Garde fans of the genre might want to look elsewhere as this is straightforward material overall.

The harsh vocals that are placed on top of the music recall the two aforementioned bands again and the crushing riffs rarely devolve into anything too progressively interesting. Instead, people looking for something similar to recent Fear Factory material should find a lot to like here as well as anyone looking for industrial metal at all. There is also a The Faceless comparison that can be made and the added instruments will appeal to fans of that band as well. An early highlight to be found here is 'Reprisal Of The Damned' early in the disc’s overall timeframe. The drumming needs to be clinical and precise with this type of material and the band is solid in this area. The vocals are the least appealing of the performance aspects here because they serve more as a place holder and don’t stick out in any way. The heavy and jagged riffs of this band may also appeal to fans of Meshuggah, but I believe the aforementioned bands are better reference points.

One final note has to be given to Nile because when Devolved is in its most Death Metal state, they sound a bit like them. 'Collateral Damage' has enough Death Metal sounds to be compared to this disc alone. There are a number of Heavy Metal fans that will be able to derive enjoyment from "Reprisal", but it’s really only a very good release overall.