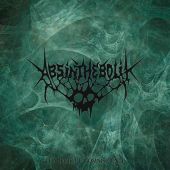 France is not known to be a metal paradise as a whole, yet this country has released some pretty amazing and very original metal. The trend in France’s metallic scene has leaned towards Gothic tinged metal and other forms of more obscure metal that is impressive and yet so bloody heavy. Enter now, five members of Absinthebolik trying to blaze their own way onto the world’s metal stage.

In listening to Absinthebolik, I am struck by the many extreme styles of metal that this band has incorporated into the making of their art. Technical Death, some Black Metal, Traditional Death and even some variances of Mathcore seem to melt into one. The two Death styles are the more prevalent than most, but as a whole the music of this French band includes shadings of all of them and more. But this try at versatility it still seems to be not enough to save it, even though they have two vocalists as well.

Throughout this EP, I am struck from opposite sides of things. Musically, they can play and play very well but the competing vocalists put the power out of the window. Song that seem to hold promise, are overshadowed by the uselessness of having two vocalist and take away from the brutality that is happening. Along with the thin recoding values - this just pulls down what might have been a 8.5 to 9 album, and reduces it to a point that it loses all of its attraction.

It is a shame that Absinthebolik has not met its hype. If they would fire one of the two vocalists (the one that seems to scream more than growls), and add in perhaps a well-rounded second guitarist – this could have been one of those albums that gives you Goosebumps and made metalheads everywhere talk about it. As it stands, it just makes me shake my head and go on to something better… disappointing.