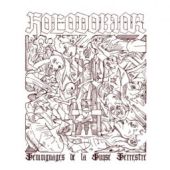 I saw this simple drawn covered CD come to me, and shades of the very early metal years peeled through my memory all at once, yet I feel this is not the music on this shiny disk. Holodomor is the name of this UK band, taking the term from a genocidal famine that happened in Ukraine provoked by the communist rulers (SRR) in 1932-1933. Let us just see what this act has in store for us.

Playing what can be honestly described as a hybrid of Black, Death and Thrash Metal, it is a surprise to hear. Holodomor play some primitive styled metal, yet it has this incognito element of being well crafted and well played that goes against the simplistic attack that seems to be there. Barbaric Technical power, this band has that in spades.

The UK based thrashers have made an EP lasting barely thirty-three minutes yet they still pounded you with this over the top brutal power that seemed to swirl around from every angle. I loved each song that they had offered up, but the song 'Evoke' had the best trenchant riff ever – even though the song only lasted for two minutes and fifty two seconds. Despite the short explosion - It was a perfect song that just summed up the band’s sound and vision within a few minutes of pummeling.

The sad scoop was that this band was now split up and that sort of news is a sad day for metal. Any band that can combine this purity of technical ability cloaked in this very simplistic approach to their music needs to be out on the road. I hope that they do reform, and keep their sound, this is one band that needs to be in the metallic world.