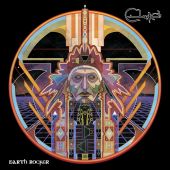 This is a fun record from beginning to end that brings a heavy groove. There are a variety of rocking songs to catch your attention. It’s more Rock than Orange Goblin and brings a similar level of quality that "Eulogy For The Damned" brought recently. The groove the band brings is what is front and center here, with songs that reach a huge level of memorability.

Throughout the album the listener will be banging their head and humming the rhythms. There is no let up from the chaos anywhere on this work. The gravelly vocals complement everything perfectly as well. It’s obvious this band would be a knockout live, but they bring the studio tracks to a stamping groove on "Earth Rocker". This is a great album to do stuff like work out too as well because of the pacing to be found here. It’s also fine for picking up and playing with a very accessible aspect as well. In terms of comparisons, one could say the band could be likened to Kyuss, which is a very high compliment indeed.

'Oh, Isabella' is a very good song later on in the disc, but almost everything here packs a punch of fun regardless. There is very little to fault here, but it could do with a few more memorable moments. If you’re a fan of Heavy Metal or Rock music, there should be something for you to like on "Earth Rocker".