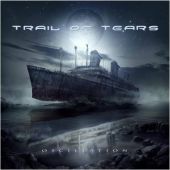 Trails Of Tears, and what a trail it is. The Gothic/Dark Metal Norwegian band are back with their seventh and possible last album. According, to vocalist, Cathrine Paulsen (released via her Facebook page) Ronny Thorsen left the band. Talk about airing your dirty laundry in public and that is exactly what this album sounds like.

The album cover itself is like a gothic Titanic that's waiting to sink. The album is beautifully arranged into a cinematic soundscape and entails the gothic story of 'Beauty and the Beast', but this is no love story. From the first track, ‘Waves Of Existence,' to the last bonus track, ‘Quick Fix Of Shame,' one thing is certain-this album belongs to Cathrine Paulsen. Paulsen's vocal ability through this album ranges from soprano to a more metal style. Her vocal on track 5, ‘Path Of Destruction,' is hypnotic and mesmerizing at times and the song has a melancholic vibe with an instrumental intro. The song really is all about Paulsen and how she feels.

The 'Beauty and the Beast' theme that runs through the album is all about who is more dominating, and it feels like you are listening to a sing off to see who the better singer is, and it doesn't always work because you kind of get tired of listening to the bitterness and the never-ending battle between Thorsen and Paulsen. Thorsen finally comes alive and seems to fight for survival by the 8th track, ‘Room 306' where his unclean vocals are very aggressive, which also flows over into the next track, ‘Our Grave Philosophy.' The album ends with the bonus track, ‘Quick Fix Of Shame,' with the battle of the sexes between the angelic vocals of Paulsen and the unclean vocals of Thorsen, still going strong. So, who wins the last battle? Well, Thorsen tries to take ‘control,' but Paulsen dominates the latter of the song.

Conclusion. "Oscillation", had the potential of a great album, however, it seems that whatever problems the band were having overpowered this potential. One thing is for sure, they got the cover right - it is like the Titanic sinking, but in very slow motion.