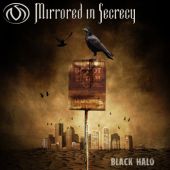 Germany is the ground floor hub for most Power Metal, and for that I celebrate that daily with a healthy dose of it. Helloween and Gamma Ray are just two bands that I have followed for years, exploring the music with passion and love. Coming out of that amazing scene is something rather different. Mirrored In Secrecy is not the typical Power Metal type fare here… this is truly out of that box.

Laying out some heavy Goth Metal with some thrashy intentions while they ended up adding their own brand of nastiness punched all into it all, Mirrored In Secrecy seems to have carved their own niche in the metal scene. This German based act seemed to have it all going for them in one powerful package that is ready to surprise the world with it.

As emotionally charged as it is heavy, Mirrored In Secrecy seems to be one of those bands that actually pulls it off. Songs on this album are amazing, although tends to lean way over being overproduced which tends to steal a great deal of the strength in the album. Out of all the tracks, I guess I like the one track 'Fear' the best out of the lot, as the lyrics seem to be the most composed of all of them.

This is another band that has disbanded because of difference in objections, and this EP was released by one single member left, before he too went on to other things. It is a sad state of affair because of the talent here had been stifled and unfulfilled. I hope that later down the line they might reform and continue this path, but that seems very unlikely. It is sad, but that is the world of metal for you.