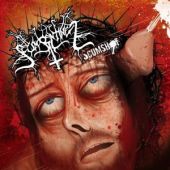 Quebec Canada’s metal scene is a rather diverse one that seems to opt more on the side of Extreme than all of them. Nasty Grind, blood caked Death and Melodic Death and even the schizophrenic Metalcore is the bulk of the music – yet lately there is more and more Black Metal coming out of our French countrymen, with a few band that have been there for alike leading the satanic charge.

Scum Sentinel has been around for a while (1999-2008 as Elfire, then changed to the name now) and plays what can be called very basic and brutal Black Metal in the vein of Mayhem to even older Darkthrone as well. There is frantic drumming, blast beats and heavily distorted tremolo picking are all there, but there is not much in the way of originality or even a small hint that they tried to do that in the first place. For all of the nasty riffage and blasting drums, it seems all so rehashed and hashed over again.

Don’t get me wrong here – my problem here is Scum Sentinel does nothing original to get them to stand out, ending up sounding like they simply have used most of the riffs from Darkthrone catalogue, and changing around shit to make it sound different. I like some of the songs, but really did not get into it, to the point that I just did only three listens to it, and went on. I like originality, if I want to hear cover bands, I will buy tribute albums.

Sadly, my fellow Canadians here have not put their best foot forward, but just imitated others and having very bad production just added to the marked disappointment I have. I hope they find their own way soon, because as it stands now – they seem to be just a cover band that adds their own words into the mix. BM fans everywhere… this is not one for you. Hate being harsh, but this was what it was.