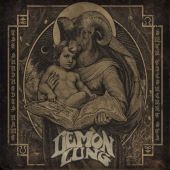 Can a band after a very amazing debut EP, come back and kick out one amazing Album that actually is even better?  If it was a band like Demon Lung that has both the talent and the drive to make whatever they want happen – hell yeah!

From the US Sin City of Las Vegas, they come with a slow churning vortex of melancholy heaviness and depressive words and pounding slow drum dirges that seem to hold so much melody.  Think of Candlemass, early Trouble with the aid of Zak Wylde’s guitar style wrapped around Solitude Aeternus with a poet’s heart beating through the marked immensity of sound that needs comparing to the first Album of Black Sabbath– you get the insanely good band that is broadening Doom Metal’s reach.

Eight songs live and breathe on this album… each having its own life of its own.  From the droning and swirl of Binding the Witch to the slowed down Candlemass-esque Incantation, the album surges and whisks you away in its slow motion riptide and into its bleak universe.  Heavy and chalked full of dark pleasure, this is one album that impresses as well as creates a full on emotional ride into the shadowed lands that we venture into rarely.

I had given Demon Lung’s self-released EP Pareidolia a 9 out of ten, not to mention it being one of my favourites to this day… The Hundredth Name rating to demonstrate the growth and talent this band has offered up in their first major Metal label release.  Candlelight Records have picked one of the finest bands to get behind and let them do what they do so good… all we have to do is buy it.  GO NOW!!