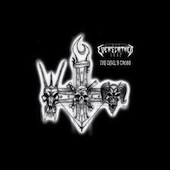 The American Death Metal scene is one of the most underrated and unappreciated in metal today. It is not really known past the North American Markets as a whole, yet the Scandinavian scene seems to be much more developed and popular on a worldwide scope. It seems to me that the masses had forgot bands like Death and Possessed had singlehandedly started what we now know as modern Death Metal today.

All of the five songs here are so fucking strong, and it seems that it harken back to the late 80’s or early 90’s thrash scene while adding in the brutality that is Death Metal.  I love their cover of Cancer’s ‘Hung, drawn and Quartered’, not to mention their own ode-de-violent Murder most Foul.  These two tracks alone are worth finding the EP for your collection… the other tracks is just icing on the cake.

This Metallic three have just shown what metalheads have known all along - three piece metal acts not only work, but they have been some of the acknowledged founding powers that have shaped today’s metal scenes.  I remember bands like Motorhead, Raven, Venom when they were three piece, were amazing.  They are in good company here with each of these metallic legends, and deservedly so.  This is a EP everyone needs to hear to appreciate.