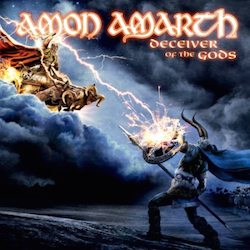 Aggression is rampant here, alongside riffs that well accompany the vocals. Don't expect exceptionally fast tempo to spew out of your speakers, just pure awesome melodic death. I've never been a huge fan of this band, though I did think to myself "why the hell not try this new release?" It turned out for the better because they fit well within the melodic death, which is one of my favorite genres of metal. I was expecting to hear an album more brutal than this, but I was well satisfied hearing this album. The melodies, production, vocals, atmosphere really blew the rest of the hair that I have left back.

There was a combination of growls which went into a transition to high end screaming, especially during the chorus bits. Everything seemed to fit really well in this recording. I'm motivated now to hear more of their material, this is for the fact that I've gained much respect for the band. Some really great melodies on here that remind me of a lot of older Arch Enemy and how the Amotts would have one guitar playing heavy rhythms alongside Michael's melodies in the lead department. That's the best way that I can describe this album's musicianship. Rhythm over lead riffs that simply dominate. The emotions were really there too, hatred, brutality, darkness, destruction that was all so ready laden destruction of melodic death annihilation. Definitely a great original release for the year. Some riffs that occur here really strike home in your memory banks and slaughter the soul! A gripping onslaught of heavy, thick chord progressions with melodies that go well along with everything else that was orchestrated during this entire album. The production sound was well done and mixing definitely held true for this one, I especially think that there was some Hypocrisy melodic riffing going on here, at least from what I've heard of Hypocrisy's newer material. But still since they're in the same genre, the influences are endless. The vocals just own and I like how there were fluctuations in that department. The biggest portion that deserves recognition was the bloody damn well music.

Do yourself a favor and if you're a melodic death metal follower and give it a listen. This release is a triumph. Amazing riffing and aggression that's heard on this entire domination of metal. Remember, not all metal is created equal, which is a given, but give yourself a break and try to follow my words here not as empty ones, but sheerly a voice of reason when it comes to evaluating this output. Get it, it won't disappoint!