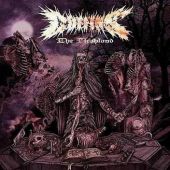 Japan has been known for trying to do things just a little different than the rest of the world usually does, unblinkingly putting it in their own sort of spin on practically everything. A four piece outfit hailing from the always expanding Metropolis of Tokyo is such a band, redefining a style of extreme metal into their own concept.

Death/Doom outfit based in Tokyo Coffins is an act that certainly makes me sit up and take a very close look at them. I am intrigued with the musical landscape of Japan and this surprising act hits the top of my list. Heavy, ponderous riffs and acid vocals that are growling explosions of pure viciousness – Coffins certainly puts the term ‘Heavy’ back into Heavy Metal, to the tenth power and even beyond.

Out of the nine tracks that are on the album, I seem to gravitate to a couple in particular. One is the bulldozer like song 'The Colossal Hole' that proves that you can be so brutally heavy and yet have this sense of melody as well. The other track is the rather disturbingly harsh 'No Saviour' because of its strong Death Metal hook and intense Doom Metal breaks leaves you wanting more even as it is fading off at the end.

This album just might land on my top ten this year. I have never come across such a ultra-heavy album that holds such brutal combination of caustic lyrics and barbaric riffing that seems never to leave my playlist. With Coffins on a very smart label now, I think the next release just might vault them higher than they ever thought they might achieve. Doom/Death just might have new emperors to be the ones to beat.

Coffins, the Death/Doom Metal kings are back with their new EP, "The Fleshlands". This is the bands fourth LP with an expected North American release date of July 9th, 2013. The metal kings will numb fans to the bone as they dominate the metal world with their memorizing riffs and terrorizing vocals.

Looking at the album cover makes one cringe and the title is less than appetizing. It is not long before the metal kings take listeners to hell. The first track, ‘Here Comes Perdition’ begins with a creepy, sinister instrumental that awakens listeners in hell, and drags them deeper with heavy guitar riffs and demonic vocals that chills the bone. The second track, ‘Hellbringer’ does not short change listeners and begins with a devilish scream that reminds listeners that hell is real, followed by swift percussion, and the electric guitar riffs that swallow the album down and deeper into hell. The album is dark and sinister, with a feeling of never-ending torment that at times is very numbing. The guitar riffs vary and do not fade into the same steady riffs, but include variations of elements through the album. As the album progresses, the feeling of being tormented and chased deeper into hell is prevalent.

The sounds on the album complement each other very well, from the deep, demonic vocals, to the crisp percussion, straight through to the varying guitar riffs. The album ends with the track, ‘Tormentopia,’ that gets inside your head and ‘torments’ you. The harsh, heavy, demonic sound of Coffins is not for everyone, but for those who dare to listen can expect one hell of a ride.

Conclusion. "The Fleshlands" will definitely surpass any previous album from Coffins, and if you like your music heavy, loud, and want to bang your head for days-this album is for you. And you just may have a few sleepless nights as well.