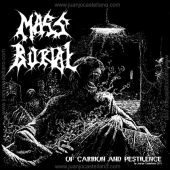 Spain is probably the last place that I would think of when comes to Old School Death Metal, and yet here we have Mass Burial that hails from Burgos, Spain, and have been planning their “Of Carrion And Pestilence” since 2002. It took a decade to get a release out but it could not possibly be any better. It reeks of cemeteries, tomb desecrators, zombies, murderous thoughts and perverted serial killers just like any Old School Death should.

Musically very simple maybe even primitive at times yet full of twists, turns and stuffed with solos, headbanging-friendly riffage and some eerie, evil sounding melodies. They conduct their attack with a sound similar to what Sunlight Studio was doing around 1990 and I couldn’t agree more with their choice. It gives the whole album the right vibe and sets the listener up on the right track. Mass Burial plow through 11 songs with pounding of a rhythm section enhanced with fat bass and chaotic drumming, sandy and rusty guitar sound and vocals that are so guttural and throaty that I needed to soothe my throat with some honey just from listening to Raul. It all sounds so freakishly old school that it seems that those boys found a way to go back in time to record this album. Could that be a reason why it took so long??

Eleven pieces of Old School Death Metal that will take you back to times of Entombed, Dismember or Autopsy first demo tapes. Don’t believe me? Just check out 4th song titled ‘Mass Burial’ and tell me that it doesn’t remind you of certain Swedish band that starts with E. Fortunately, those Spaniards have enough ideas to put their own stamp on things, and songs like ‘Post War Psychosis’,’ Intense Genital Punishment’,’ Deathlike Dream’ to name a few are intense, original ass kickers that burst with amazing riffs, leads and atmosphere.

“Of Carrion And Pestilence” spun in my player for a long time and gave me plenty of enjoyment. Good album for anybody with affection towards metal that everybody was banging their heads to in early 90’s, and I also think a good one to reminisce what was it all about. Tear.