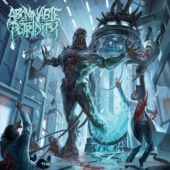 Type: Full-Length
Release Date: 2012
Label: Brutal Bands
Genre: Brutal, Death, Slam
1 Remnants Of The Tortured
2 A Massacre In The North
3 Letting Them Fall...
4 A Burial For The Abandoned
5 Lack Of Oxygen
6 Wormhole Inversion
7 The Anomalies Of Artificial Origin
8 The Last Communion
MetalBite on YouTube

Okay, not exactly sure how I first stumbled upon these guys. I think I was stoned and was listening to Analepsy, and this came up in the suggested bands, so I decided to check it out. First thing I noticed: the intro is from Dead Space! That alone won these guys a lot of bonus points right off the bat. And when "Remnants of the Tortured" actually kicked in, I was like HOLY SHIT this is good. I then started checking these guys out online, where they were from, when was this released, etc. And what do I see? Fucking Disgorge Matti is on vocals. Oh, fuck yes.

I’ve been living with this album now for a good while and it is absolutely fucking skull crushing. It’s just way too good, and usually I’m not even a slam type of person. But this album is not all about slams or that crap, it’s actually just a very solid death metal record. Sharp riffs with just enough technicality, creative and powerful drumming, and absolutely insane vocals from Matti, who pretty much sounds like the demon that's on the album cover.

I don’t know what more to add, it’s just so good. It’s so much fun to listen to, and it’s all composed and put together in a way that just makes it easy to listen to and enjoy. All that said though, its brutal as fuck. And I’m not kidding when I say that. I mean, I wasn’t really surprised when I found out these guys were Russian, because Russians are fucking crazy. Leave it to them to kick things up a few notches.

I just can’t get over how fucking good this is. It grinds, it blasts, it slams and for the style they play, it’s just perfect. I’ve heard very few bands do it as good as this. The production too, is stellar. Everything is clear and loud as fuck. Feels like with every song you’re taking a sledgehammer to the chest.