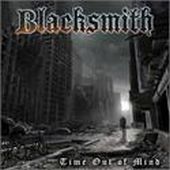 The United States Power Metal scene has been one scene that is in a class in itself – being very much heavier and faster than their European counterparts since the late 80’s. It is a more powerful style of metal, while still offering up some great musicianship and melody to go along with the monster riffs and heaviness the USPM has developed.

Formed back in 1984 in Albany New York, Blacksmith was one band going up in the metal world, and going up fast. Because of different things (like label troubles) the band sadly disappeared from the scene. Thankfully they are back out and knocking our asses off with their brand of brutal Power Metal for the world to hear. Album "Time Out Of Mind" was actually shelved on their old label Tropical Records but now re-mastered by Heaven and Hell Records, it has come to the masses finally.

Sounding like a totally wicked cross between 80’s versions of Anthrax and early Testament with a massive injection of some older styles of Power Metal for the basis for it all, the result is remarkable and far more enjoyable than some styles of metal being released these days. I totally got into the tracks like the monstrously sonic attack of 'The Lesser Evil' to the more brutal shredding of 'Live By Violence'. Each track is a force in on itself. Old school has never sounded so fuckin’ good and that is a good thing for metal in general.

Like the craftsmen that the band is named after, Blacksmith have given us an amazing album - despite being shelved for so many years. It is a tribute to how good and moving the older metal still is. Many thanks to Heaven and Hell Records, they have brought forth a band that is giving us a lesson on what metal truly is… heavy, brutal and o-so-good. Life is very good.