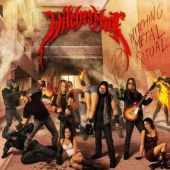 Texas had spawned one of metal’s most beloved act… the mighty Pantera, and that saved metal in the sadly Grunge laden 90’s. That's thankfully gone now. Other bands have come out of the lone star state, yet have not had the impact like the late Dimebag Darrell and company, yet Texas still can surprise you in the end.

Combining stellar NWOBHM styling, riff driven Germanic Power Metal, cutthroat Thrash and ballsy Speed Metal, this band puts out some impressive metal that seems like your entire album collection in one place. Addictive harmonies and chugging guitars, with a feeling of pure passion flowing throughout the album, Witches Mark attains that balance between old school and putting out metal that can stand up to any of the newer bands out there.

Class tracks include the headbanging inducing 'Salem’s Fire', the Accept styled swagger of 'Swarm' to the track 'We Die' that seems to be a written in the style of the late Ronnie James Dio. They do not change any of the old school vibe or power, yet the music never becomes tiring or seems to be out-of-date. Few bands have done this successfully – but these guys certainly have pulled it off in a huge way.

The only drawback to the album, is the way that it had been recorded. The album sounds muffled and unclear as the vocals and guitars seem to just get lost between one another with no defining separation. It seemed so one dimensional and flat and that is not the hallmark of Classic Metal. The result is a sad sounding monotone like recording that makes the entire experience of listening feel lessened.

Heaven and Hell Records have dropped the ball here, and I for one urge them to open their wallets and pay for a good producer – this album could have been so much more than what it is and it should have been in the first place. A band this fucking good needs that sort of professionalism.