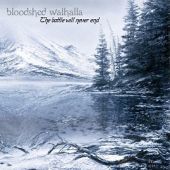 Buy on: Bandcamp
Type: Full-Length
Release Date: 2012
Label: Fog Foundation
Genre: Viking
1 Heimdallr
2 Blood And Fire
3 At The End Of The World
4 The Battle Will Never End
5 The Storm
6 Land Of Fire
7 My Sword Again For You

Very epic and pompous music is presented here by Bloodshed Walhalla that has a heroic quality to it. They scour similar territories to a more folk-oriented Manowar with the grandiose nature, but never achieve the quality of the best albums by that band.

The epic quality of the songs gives them an entertainment value in itself, but the reasonably solid songwriting backs up the band even more. There is also some added chanting added often in the background to re-enforce the epic aspect of the music as seen from the title track of the album. More Viking Metal oriented approaches similar to Bathory and early Enslaved are accurate musically, but the vocals are clean and more similar to Manowar.

"The Battle Will Never End" does not have enough grandiosity or adventurousness to enrapture the most jaded heavy metal fan, however, who will be screaming for more at the end of the day. Overall, Bloodshed Walhalla has a good grasp of their niche of music and performs the Viking/Epic music reasonably well enough for an entertaining listen.