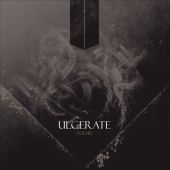 Ulcerate arrives with another dissonant and jarring offering that will make the most demanding Death Metal fan quiver at the knees. The music here sounds more evil and apocalyptic than before and perhaps finds them closest to Deathspell Omega in sound. There is still a post-metal aspect here, but it is drowned out by the overall nefarious aura they are going for. The music is powerful as always and very layered as seen in 'Confronting Entropy', for example.

Ulcerate has always struck me as a band that needs multiple listens to uncover their brilliance and "Vermis" is no different requiring time and effort. Vocals are malevolent as usual and take a back seat to the guitars and instrumentation in my opinion. The overpowering nature of the riffs is the most appealing part of the material here and these are more twisted, ominous and complex than ever. Fans of Immolation might want to stick more with their latest because that band’s music remains easier to follow than Ulcerate's. Those looking for a more rewarding listen in the long term will want to hop on here, however. The biggest complaint I have with this disc is that it sounds too similar to their last couple of outings, "The Destroyers Of All" and "Everything Is Fire". Attempts to make their music more Progressive would be a welcome change in the future.

"Vermis" is still a crushing, evil and complex effort that will be one of the better efforts from the death metal genre this year, however.