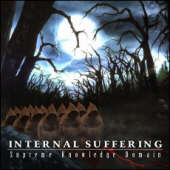 I'm getting kind of bored of listening to and reviewing technical death metal. First I did the old school stuff, then the newer stuff, then I had a few days where I was stuck on where to go next until I suddenly started developing a craving for my next favorite subgenre of death metal; brutal death metal. I fuckin' love this shit, man. It's so goddamn heavy and, unlike technical death metal, absolutely brainless most of the time. No dedicating too much time to song structuring and melodic solos and cutting edge production, no clean singing, no long atmospheric songs. Just riffs, completely unintelligible vocals and non stop blast beats. Most of the bands make this music with one idea in mind - "how can we make our music as unlistenable to the general public as possible?" It's not like dissonant death metal (Gorguts, Ulcerate, Portal) where it's carefully calculated chaos, this is just stupid chaotic, and I love it. Internal Suffering is a band that absolutely mastered the art of unlistenable brutality with their debut record "Supreme Knowledge Domain," and I consider it to be one of the heaviest, craziest and best brutal death metal albums ever made.

Imagine if Disgorge was taken up an extra notch in terms of sheer insanity. The production is peculiarly horrendous. It sounds like this was recorded outside during a category 5 hurricane. Most of the riffs are complete white noise on the first few listens and only after you've familiarized yourself with it do they start to slowly appear. There are some solos in the album but they're buried in the background. The riffing just sounds like bouts of thunder constantly rocketing off in the distance. The bass is lower than the life expectancy of a child with a gunshot wound to the head, the drums just pound away without ever taking a rest, and the vocalist may very well be Satan himself. By all means, everything sounds like absolute shit and it's almost entirely unlistenable. But that's what's so great about this album. It encompasses all of what makes brutal death metal the genre that it is and packs it all into a short 30 minute burst.

The riffs are pretty good once you're able to understand what's going on. They're pretty groovy, sometimes technical but not too much so that it just borders into being some overly complex brutal death metal that might as well just be tech death. The pinch harmonics make the experience so much better, they're used very nicely and add a little bit more punch to the groovy riffs when they're incorporated in.

Vocals are usually always very monotonous in this brand of death metal; almost every single vocalist sounds the same and doesn't have much range and this vocalist is really no different. Does it work? Of course it does. It's a really low gurgle and I can't understand a single lyric on the entire album aside from song titles, so that's a plus. There just isn't much range and if the vocals were isolated, it would sound like almost every other vocalist for this genre. The drums are more of the same, generic, but, what did you expect? If you're turning an album of this caliber on, you should expect nothing but blast beats 100% of the time with nothing else going on. The kick drum sounds ridiculously good on this record, I forgot to mention. I don't know if it's just me but it just sounds so fucking heavy.

Do you like brutal death metal? If no, then you most certainly won't like this album. If yes, then… well, you might. Even for brutal death metal, this is extremely abrasive. I don't think I've heard a brutal death metal record quite as unapproachable as this one. It's like a chained lion that just got injected with a pound of cocaine. It's fucking intense and never slows down for even a second. I also appreciate that they didn't add in any dumb interludes, or worse, those idiotic intros and outros that brutal death metal loves to do. You know the ones I'm talking about, the horror movie-esque spoken words. This has none of that and just gives you straight up brutal death metal for 31 minutes and never lets off the gas. It's definitely one of my favorites of the genre, a classic and I'd argue a must listen at least once for any fan of this style of death metal. Uncompromisingly brutal.