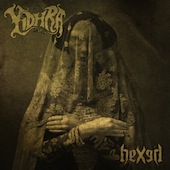 “Hexed” album cover gives me the creeps. Lifeless picture of a deceased woman with arms in pharaonic pose with wavy veil that covers her mummified face just enough to keep it secretive, dress covered in peculiar writing, her hands positioned in a way to possibly give a message to the living. I’m creeped out by it but yet I cannot stop myself from looking at her. Could she be Yidhra herself, or is it one of her shape shifting forms? Is that how you end up when she is done with you? I guess I’ll never know. “Hexed” is the first full length studio album from a band Yidhra, and if that’s how they start there is no telling where they could get. I think top is the only way.

‘Witch Queen’ (coincidently an explanation to a name Yidhra) is the opening track and it sets the tone for the whole album from the very beginning. Dark, slow guitars start a dirty groove to get things into motion and then this frightening occult motive surfaces out of nowhere to set the mood for the rest of the album. It doesn’t get better than that, believe you me. Guitars produce a lot of epic riffing and create sinister atmosphere throughout a whole album without any lack of momentum. Over an hour of high quality Doom Metal with plenty of variation and crushing gloom. Drums are perfectly positioned in the mix and for a Doom Metal album are very entertaining. As with any Doom release, I wish every once in a while for the drums to just surprise me with something wicked but it doesn’t happen here. Good, professional and very solid but no surprises. Thick rumble of the bass with its deep and fuzzy tone is something that originally grabbed me by the ear. It sounds so freakishly evil that it should have its own kingdom or at least its own castle in the kingdom of bass. Thick as molasses, fuzzy like a wooly Sasquatch and monstrous like Mothra. Massive vibrations. The last part of this evil creature is vocalist Ted. Sound of his voice, the manner he sings with and the overall tone that his voice gives to the album is spine chilling. He has this hypnotizing quality to it but you know that if fall under it you’ll end up in the tombs without a way to get back. No snap of his fingers and no waking up from that one. Frightening.

“Hexed” is an album that brought my interest in Doom Metal back. Everything that I look for and desire from a Doom Metal album is on here, and it is all superbly produced, recorded and played out. As a matter of fact it is an album that anyone with an interest in Doom Metal should get accustomed with. Like it or not it has a classic quality to it and don’t just go by what I say. Bill Metoyer (Slayer, Corrosion Of Conformity, Trouble, D.R.I., Sacred Reich, Hirax, Dark Angel, Morbid Angel and many more…) which produced the album says: “not since Trouble have I worked with a band in his genre so talented. Yidhra! I have no clue what the name means, but to me it means DOOM!” Need I say more?