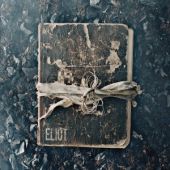 Coincidence is a funny thing. I was just talking to someone about bands from France and how their metal scene seems to be coming around again. We talked about melodic death, black metal or progressive death bands, about how well they sound and how little they’re known, and then Hord from France and their The Book Of Eliot happens to me. Haven’t heard anything from there in a while and after listening few times I can’t put them solidly in any of those categories, but there are smatterings of those in the mix, also with some groove, some industrial and even death.

It seems like quite a feat to combine so many influences into one, but Hord has it figured it out for the most part. Guitar work is solid and rarely ceases to pack a punch coming down with relentless chugs or beautiful passages and tons of unique themes. There are parts of some songs that seem a little redundant but they disappear quickly, followed by change of rhythm or distinctive melody. Rumble of the bass, ever-changing vocals and use of samples pulls you in and captivates you in a constant flow of intriguing musical ideas. Tempo changes, moments of extreme metal going into calm atmospheric passages, vocals that go from clean singing, to growl, to screaming, to occasional moments of just speaking, all those elements create musical images that are hard to forget. Everything works just right for Hord, but there is one idea that I would like them to erase. It would be vocals - when growling goes into monotonous metalcore scream territory. It messes up the harmony for me and makes me lose focus. Fortunately this is just a minor lapse.

I very much like the flow of the album and character of it. It starts with slow atmospheric passage and then turns into harsh and mechanical beating to eventually combine all those elements into one. It happens all throughout the album and to me it enhances the experience quite tremendously. The idea of turning hard and punishing thumping into a melodic landscape or go with both for a moment and then split into something completely different is not new by any means, but to do it right is the measure of success. Hord are very successful in doing that and I very much enjoyed what they offered.

The Book Of Eliot is a concept album. It is a poetical, visual and musical journey through the ashes of humanity, following the life and fall of the last human on earth through his personal diary. Looking at the album artwork, reading the lyrics and listening to the album I can say that music accompanies it beautifully. I recommend this one to everybody with a gist of imagination, taste for adventure and an open mind. Fans of Mnemic, Devin Townsend, Raunchy, Sybreed should not miss that one.