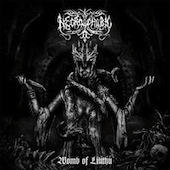 Investigative journalists have revealed that Necrophobic's rehearsal room was bugged at the time of the creation of Womb of Lilithu. Here is an exclusive excerpt. "The last album was absolutely perfect. How can we go on now?" - "Well, if we cannot increase quality, we still can increase quantity." - "Good idea!" - "So, let's go home and beat our wives and children." - "Great idea! It's overdue!" - "Hey, Tobbe, this was just a joke. Tobbe, do you hear me? Tobbe?"

Tobbe Sidegård, lead vocalist and quarrelsome husband, was already on his way and didn't hear his band mates, but that's not my subject today. The focus is put on Womb of Lilithu, an album that generates mixed feelings. On the one hand, Necrophobic show their entire experience and present dark harmonies in abundance. On the other hand, something deep in me tells me that they can do it better. Death to All, the masterpiece of 2009, overshadows the here presented work. I know that it is hard to believe, but already the first regular song after the intro, namely "Splendour Nigri Solis" suffers from verses that lack of inspiration. Fortunately, this kind of shortcoming remains almost an isolated case. In any case, the world has heard thousands of much worse songs, but this mid-tempo piece scores only with its solo and the fairly demonic background choirs. Necrophobic shy away from crossing the border to insanity, but exactly this action made songs such as "Revelation 666" so extremely fantastic.

The further songs demonstrate that Necrophobic are still able to read their compass. However, there is a small number of exceptions. Angry eruptions (so far, so good) are combined with rather soft and melodic fragments which could have been the harbingers of Watain's last work (not so good). "The Mild Hunt" (don't know exactly its name) showed a new, pretty stupid face of Watain and a certain number of parts, especially the first verse of "Opium Black", the dreamy solo of "Marchosias" and the piano intro and outro of "Infinite Infernalis", are heading for new groups of customers as well, but fortunately to a lesser extent. By the way, Watain are listed on Necrophobic's homepage under the headline "Similar artists on tour", while I am writing this review. But in fact, this does not indicate any similarity between Watain and Necrophobic. Kampfar also show up in this list (and this leaves me slightly confused).

In view of these medium-sized deficiencies, the quality of the best, flawless tracks become obvious and cannot be overlooked. "Furfur", for example, is like a devilish drilling tool that penetrates deeper and deeper into the listener's mind. The spurring main riff reflects the blazing fires of hell and the atmosphere of this song is truly satanic. Further tunes leave a strong impression, yet it is a fact that the Swedes mostly do not drive full speed ahead. Instead, they intoxicate themselves with the excessive use of background choirs while delivering rather controlled detonations than unleashed forces. It must be mentioned in every Necrophobic review anew that the band has enormous song-writing skills and I assume an outstanding degree of musicianship. In view of the constantly changing line-ups, the consistency of the band is amazing. Nevertheless, the extra portion of apocalyptic brilliance which made Death to All to a gargantuan milestone of the genre, is missing. Sidegård's voice sounds as vicious as ever, the leads and riffs mirror the band's in-depth grasp of sonic obscurity and hundreds of competitors would give all that they have got for such a precise, ingenious production. But when push comes to shove, I always prefer to listen to their album from 2009 (and I do not need much time to make my decision).

Without being lame, Womb of Lilithu emphasizes the desperate yet majestic side of Necrophobic. It develops an unfathomable depth in its best moments, and it does not lack of drama. For instance, "The Necromancer" relies on a very efficient construction. The interaction of Spartan verses and the opulent chorus does not fail to have its intended effect on the listener. I could mention further examples, but I hope the stylistic approach and the strengths of the album have become clear. Thus, I really can recommend this album with a clear conscience, but I cannot label it as an immaculate masterpiece. However, there are bigger problems in life. Feel free and ask Tobbe for details.