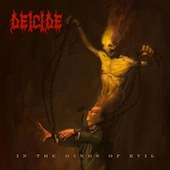 Type: Full-Length
Release Date: November 22nd, 2013
Label: Century Media Records
Genre: Death
1 In the Minds Of Evil
2 Thou Begone
3 Godkill
4 Beyond Salvation
5 Misery Of One
6 Between The Flesh And The Void
7 Even The Gods Can Bleed
8 Trample The Cross
9 Banished By Evil
10 Kill The Light Of Christ
11 End The Wrath Of God
MetalBite on YouTube

My initial opinion was that this was a total "dud" compared to past releases, though after that original thought, I realized that yes this is the new generation of Deicide. It's actually one of their best in years. The reason is because the music on here is HEAVY and diverse. It features guitars that gallop in essence, also featuring bar chord mania with maniacal speed picking frenzies. Some of the drums seem like inhumanly possible, though Steve still pulls it off. They also use a lot of lead guitar giving it a more "eerie" sound, though this is not by any means the darkest Deicide release in their discography. Steve writes the music, though during the Hoffman brothers’ era they were different.

Glen focuses more on low-end vocals since he's aged though there are some back-up screams. It does fit with the music definitely, it's just not as intense as when their debut came out circa 1990. However, the quality of the music is still good enough to give this a good rating. The leads are active quite a lot and they seem to insist on their fretboard flying. This is a little bit longer of an album, though it's under 40 minutes. Still, the quality in the songwriting and the new era of the band seems to focus more on a whole different sort of guitar layout that what early Deicide listeners like myself were used to hearing. This album I didn't think was mediocre death metal, it has some passion there still.

There's more experimental guitars here. The lead guitar will go off when Glen's singing or they'll use rhythm guitar over chorus verses or just Glen spewing out blasphemous lyrics which seem to mix well with the overall sound. They never really did that much with the old lineup. The experimenting and obliteration of musical annihilation remains to be, but the music is better than it has been in a long while. That's why a lot of people tended to favor their older because it was innovative and highly influential in the death metal world. You'll never get that same quality of music from them, but on In the Minds of Evil, they show musical progression from their new era of members. Going strong!

You will not find the same precision in leads as the Hoffman brothers, but still you get musical variety on here. The rhythms, leads, production, drums and vocals definitely are likeable because of the way everything seemed to fit together for a solid album. These musicians still show that they're working hard to carry the legacy of the old to the new. I think that the bulk of the music in terms of the rhythm guitar is a lot of tremolo picking, but overall, it's a well carried out album both musically or you might be apt to say in composition. The variety with those lead guitar moments that play over the rhythms seem to be a change from how they used to conduct their music.

So many people are stuck on the first two albums, I myself was considered to be one. But on here, the music still is quality because of the experimenting, and they use some variety in vocals, though not much of all really. I think that they decided a different approach on here, using a lot of fast guitar, but they change it up a little and the fact that they're using a lot of leads and harmonies over the vocals to give that "evil" sense that's always brewing with this blasphemous death metal band. Keep an open mind to what they've put out here and just remember the new generation of Deicide is here ever since the departure of the Hoffman brothers and has been for over 10 years! Get this one!