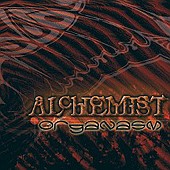 Alchemist whose career has spanned 10 years and five records is Australia’s finest heavy metal act. I have absolutely no qualms about saying that to anyone I meet and know. “Organasm”, the band’s latest ruby, is a clear indication that Alchemist is ripping apart the competition in the fields of alternative metal.

“Organasm” sees the home grown organic feel been finally perfected by Alchemist, tracks like ‘Tide In, Mind Out’ just reek of sitting back with a few coldies and watching the footy. Whilst, the track ‘Austral Spectrum’ has samples of didgeridoo giving it that distinctive Aussie feel (is it any wonder these guys are loved down here?).

Diversity. Alchemist are pioneers of the word ‘diversity’. Fans of melodic death metal, hyper speed black metal, and crunchy power metal will all get into this CD without a hitch. This album is the soundtrack to evolution and how the world grows around us, to the gentle swaying of the gum trees, to the colossal crashing of gargantuan waves on the sandy beach-heads. Yet “Organasm” does not loose any of the Arabic and middle-eastern influences that made Alchemist such a prized metal act.

Vocalist Adam, bellows, screams, screeches and sings his way through ten solid and mind-numbingly good tracks, never before has he sounded so good to an Alchemist fan. The innovative guitar work supplied by Adam and Roy is what makes this band win through with “Organasm” however. Never rehashing the same riff or melody while still keeping that psychedelic organic feel happening, Alchemist are the masters of a hybrid form of metal that will surely have heads turning on shoulders everywhere in the world.

Bottom Line: This album will appeal to anyone with an open mind, and/or appreciation of quality tunes. Fans of Tool, this is a band that you will adore.