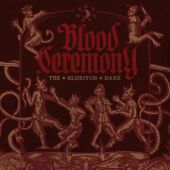 Toronto, Canada's Blood Ceremony released their third and best album to date earlier this year. I admit that I'm a latecomer to this band, having missed their two previous releases. However, after hearing this I went back to listen to the first two. Although their early work is good and has some really special moments, it seems as though they put all of that together on "The Eldritch Dark".

Being labeled as "Occult Rock" or "Psychedelic Rock" is what peaked my interest. Recently I have been all over this scene looking for that stand out album. Bands like The Devil's Blood and Jess And The Ancient Ones have some really good stuff, most notably the "Come Reap" EP from The Devil's Blood and the song 'Astral Sabbat' from Jess And The Ancient Ones. Where these two bands fail to make complete memorable albums, Blood Ceremony succeeds with "The Eldritch Dark".

"The Eldritch Dark" starts out with a bang on the opening track 'Witchwood'. You can hear the multitude of influences here. Think Jethro Tull meets Jefferson Airplane meets Blue Oyster Cult with Black Sabbath riffs. Alia O'Brien's vocals are superb and her use of the organ and flute add to the atmosphere. Sean Kennedy's guitar playing is excellent and the interplay between him and Alia's flute on this track sets the stage for what is a flawless album. There are no throw away's on here at all. The album builds momentum as it moves along. Each track providing the listener with an otherworldly experience. The acoustic and folkish song 'Lord Summerisle' sees the pair of Gadke and O'Brien harmonizing vocally and the lyrics and title are obviously referencing the 1973 classic film "The Wicker Man". The two strongest tracks here are the title track and 'Drawing Down The Moon'. The prior being a very heavy riff oriented song and Alia's vocals here are so strong. The Sabbath style riffs are in full force here and shows off the more doomy side of the band. The latter shows off the psychedelic side of the band. It's sweeping organs and eerie yet beautiful melodies take center stage here. At the three minute mark a heavy groovy riff kicks in and Alia shouts out "we welcome you to the sabbat, with a knowledge of hellfire" which sends chills down your spine.

The music here harkens back to the best of 1970's Hard Rock and 1960's psychedilia. Hammond organ, Sabbathian guitar tones, the familiar vocal lines that Grace Slick made famous with Jefferson Airplane, and the folkish flute sections that one can't help but compare to Jethro Tull. Alia O'Brien's triple threat of vocals, organ, and flute take center stage here as they should, but Kennedy's guitar work is slick and his riffs add the heaviness. The rhythm section of Gadke (bass) and Carrillo (drums) provide the perfect backdrop for this familiar yet unique sound. However, this is not just another retro band. While they do use these elements, they give them a fresh new sound making this album stand out amongst all others in this genre.

The lyrics on this album also separate Blood Ceremony from their peers. The standard satanic themes from most bands in the "Occult Rock" scene are left behind for the old gods, mythological creatures, astrology and paganism. Guitarist Sean Kennedy writes all the lyrics, and though one might feel they are childish, me not feeling that way at all, they absolutely work and are very well crafted. Although I was slightly upset that vocalist Alia O'Brien didn't write them, she totally does them justice with her ability to write amazing vocal lines.

"The Eldritch Dark" is a complete album. I look forward to future release from this band. Blood Ceremony takes "Occult Rock" to new levels by displaying all of its strengths and none of its weaknesses. This is one of the best and most memorable albums of 2013. Go out and buy this album and show this amazing band the support they deserve