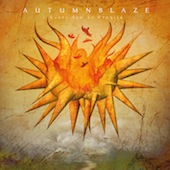 Autumnblaze formed in Saarland, Germany back in 1996, after releasing a demo in 1997 and an EP in 1998 they release their first long player "DammerElbenTragodie" in 1999. Somehow this band has flown under my radar for fifteen plus years. When asked if I would like to review the album, I accepted the challenge with open arms and an open mind. However, because of my ignorance to their previous works, I will not be able to talk about how they have or have not progressed as a band. But, this is a review of their current release, so that's exactly what I will do.

"Every Sun Is Fragile" is the sixth full length release from Autumnblaze. The style of music played here is "Gothic, Atmospheric Rock/Metal". The bands that come to mind when trying to describe their sound would be Katatonia, Anathema, and Alcest. Autumnblaze walk the line between Rock and Metal, jumping back and forth with varying amounts of success. There are some clunkers on this album, but they do succeed at creating some memorable songs as well.

After a nice little instrumental intro, the first proper song on the album, 'New Ghosts In Town, has a "Viva Emptiness" era Katatonia vibe to it. It maintains this vibe throughout most of the songs seven plus minutes, however the last minute of the song builds into a Alcest-esc finish. This is a good song and it peaked my interest and excitement of the band it took me all this time to hear. 'Im Spiegel' draws the listener in with it's punchy riff that has very jumpy feel to it. Probably being the most metal song, with hits heavy distorted guitars and harsh vocals, shows how these guys jump from Rock to Metal with relative ease. This track is followed by the balladish 'Mein Engel, Der Aus Augen FileBt'. This song shows the band doing what it does best. I believe they feel at home and most comfortable playing the softer Rock style tunes. This is very apparent on 'How I Learned To Burn My Teardrops'. This is my favorite song on the album. An absolutely beautiful song that leaves the listener somewhere between tears of sorrow and joy. Another definite winner on the album is 'A Place For Paper Diamonds'. This song has all the feel and beauty of the previous song mentioned with a little of their heavier moments sprinkled in. This works perfectly here, where it seems to fail elsewhere on the album.

"Every Sun Is Fragile" is a good album with hints of greatness. I feel that at fifty-four minutes it's a little too long. There is some filler here. I would like to see Autumnblaze craft more songs like 'How I Learned To Burn My Teardrops' moving forward. Even though there are some clunkers here, there are enough good moments that make this a worthwhile purchase.