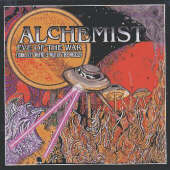 Australia’s psychedelic metal monstrosities, Alchemist, certainly choose interesting material to cover within their metal exploits. None other than Jeff Wayne’s “War of the Worlds” has been covered by these ambitious Aussie metal icons.

Alchemist have always been the sort of band that gets off on incorporating world music influences such as Middle Eastern modifications within their guitar riffages and general metal mayhem, unfortunately for Alchemist they reside within the Australia metal scene, and as such get very little exposure to the world. The Aussie metal scene is very stagnant in acts trying to promote music overseas.

“Eve of the War” is comprised of a cover song, two live bits of material, a remix and two songs from past albums. ‘Eve of the War’ without being covered is a fucking fantastic tune and really brings out some nostalgic elements, and when given that heavy psychedelic metal tinge, makes it really uncontrollably awesome. The two live tracks are really a special treat for the more ‘out there’ metal fans (those into Tool, Tiamat, and Samael sort of bands), ‘Yoni Kunda’ has Aboriginal inspired written all over it, and is played time and time again live in front of Alchemist’s fans in Australia. ‘Chinese Whispers’ the second live jewel is ultimate and Opeth-like in stature and prowess. Yet it will appeal more to Tool fans than Opeth lovers, such is the doppleganging nature of Alchemist. ‘Chinese Whispers’ contains those middle-eastern elements that Tool utilised on “Lateralus” without sounding plagiaristic, but possessing melodies and harmonies all of its own.

Unfortunately the next two tracks are a bit of a let down, on your average run-of-the-mill band these songs would fit right in, but Alchemist do not fit this bill. ‘Koni Yunda’ “is just pure fuckin disco and I have no idea what they were thinking while recording this crap...”(Chris ‘Zgred’ 3/10/2001) (statement pertains perfectly to this rubbish Alchemist recorded). ‘Brumal (A View From Pluto)' ruins the whole tempo that “Eve of the War” had created up unto this point. ‘Worlds Within Worlds’ fortunately ends the MCD well with tasty samples and groovy death-styled riffs.

Bottom Line: Perfect introduction to Alchemist. “Eve of the War” is cheap as chips and contains solid and innovative material from one of Australia’s finest acts.