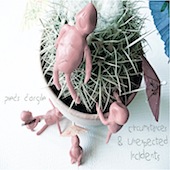 The Progressive flavor is the most prominent feature of this short EP. There is a desire to be interesting and imaginative throughout these three tracks, which is a nice breath of fresh air throughout.

The songs have many shifts and changes between different levels of volume that greatly recalls the likes of Opeth. The third track 'Doomsday Deviation' was almost eerily similar to 'The Moor' from "Still Life" from that band. There are some stranger parts that made me think of Sculptured present here as well. The respect for good Progressive acts pays off though, because this is a very invigorating musical experience despite being relatively short. The continued variety towards the later portions of the disc makes it imminently listenable stuff throughout. The musicianship is good, but not quite as tight perhaps as the bands mentioned which makes this album a step down from the best of those acts.

Still, with a large amount of variation in the instruments and the vocals, there is plenty to like with this disc. It is short and it’s not perfect, but "Circumstances And Unexpected Incidents" is very interesting and well thought out material for sure.