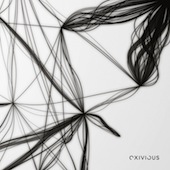 An album of this nature should be released with warning labels. WARNING: This is not for the casual listener. WARNING: There are no vocals contained on this release. WARNING: Listening to this may cause your face to melt and your brain to explode.

Exivious play Progressive Jazz Metal fusion. Being the brain child of former Cynic guitarist Tymon Kruidenier, whose performance on the "Traced In Air" LP and "Re-Traced" EP, which is stellar to say the least. The band also features former Pestilence drummer Yuma van Eekelen, bassist Robin Zielhorst and gutarist Michel Nienhuis, who create soundscapes, that will expand the mind if not blow it up completely.

When I hear the words Jazz Metal fusion, I tend to be very skeptical. It seems as a lot of bands take on this task with best intentions, but somehow fall short of the mark. This is not due to a lack of musicianship, but rather the ability to craft memorable songs. It's as if the focus leans more towards them noodling with their instruments and technicality rather than playing with feeling and creating a song that has a flow to it. This is not the case with Exivious. Although they have all the technical ability in the world, they manage to craft extremely memorable songs.

Exivious also manage not to get get stuck in any form of this expansive sound for too long. Although, there is not as much heavy guitar riffage as there is technical fret playing, there is enough to keep the listener happy and interested in what they are hearing. The other key element, is when the guitars are going off on their journey, they never go to far that the listener gets lost. They somehow have found a perfect balance. I mention the guitars, because as I see it, they're the focal point. However, each instrument is placed perfectly in the mix to give "Liminal" the best possible sound that can be obtained. The other great thing about this release is that aside for the use of saxophone on 'Deeply Woven' these four guys pull off this sound with just guitars, bass and drums. The idea of this stripped down instrumentation approach makes this a remarkable album and something to behold.

"Liminal" is only the second release from Exivious, and if this is what they can accomplish this early in their career, the sky is the limit for these guys. If you like to be challenged by the music you listen to, and pick up on sounds and ideas you may have missed during the first ten listens, than this album is for you.