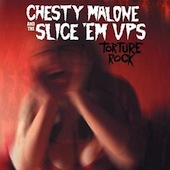 I was into the whole Punk/Metal crossover after hearing DRI, The Plasmatics and Carnivore and others, and admittedly I am a fan of older Danzig. I still am a true blooded metalhead down to my soul, but I still like some of the Crossover scene.

Cutting their teeth in the down and dirty Punk scene of New York Chesty Malone And The Slice ‘em Ups comes at you with a Crossover attack that is hard to push away. Coming across like a vile concoction of The Misfits, Black Flag and Cramps mixed with the likes of Venom, Black Sabbath, DRI and Carnivore this foursome plays some wickedly mean yet amazingly enjoyable music.

Fifteen songs are offered up here, each one sounding like a Crossover version of old ‘b’ horror movies mixed with Shock Rock. Ms. Malone and company are Punk through and through, yet they also show great musicianship and fire that leans to the metal end of the spectrum. From the Punk attack of 'Primordial Times' then the change to the more metallic 'Filth Eater'. Chesty Malone and her bandmates exude both copious amounts of fun and passion for what they do.

A solid album complements of Chesty Malone And The Slice ‘em Ups. They are a band that may not ever get a whole lot of attention but they should, because simply they are a great band that takes seriously the nearly lost art of just having a damned good time while being as bloody as some Death Metal bands get.