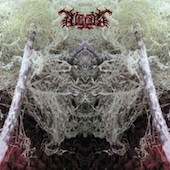 After a horrific drive home from work, due to the foot of snow that has been dumped on us in the last twenty-four hours, I now sit safely tucked inside four walls. I arrive home and find this promo in my inbox with the words "Sierra Mountains blacked death cultist, Valdur". I am instantly intrigued, seeing this as the perfect album to fit the weather outside. Feeling energized from surviving my treacherous journey home, I click play and sit back to experience, for the first time, this three piece from the mountain town of Mammoth Lakes, California.

Valdur prove that no longer should there be any hang ups with being a USBM band. They create cold, bleak and terrifying sounds, that bring forth the feeling of an impending war. With the vocals leaning more on the Death Metal side of the track, it gives their sound an added dynamic. The overall feel here is one of frigid Black Metal. I guess at one time they had a more "Blackened Death" approach, but everything I'm hearing reeks of Black Metal, even with the deeper death growls from vocalist/guitarist Samuel.

"At War With" is the third full length from these black metalers. After a nice little intro simply titled 'Enter' the mayhem begins. Most of the songs here are fast paced, with enough mid paced to slower moments to keep this interesting. There is nothing all too original going on, however they manage to keep things fresh with little instrumental pieces that give this album a flow. 'Vast' is perfect example of this, beginning with a churchish chant, then leading into an unrelenting drum beat and tremolo picking, and culminating in a fantastic doom riff as it fades out. There are actually a few truly special moments on this album. 'The Calm Before The War' sees the trio at there coldest, with the Doom laden riffs in full force as it maintains all of the bleakness of "cult" Black Metal. The song shifts in and out of hyper-speed to slow riffs and make this one of the albums winners. The best tune on "At War With" comes in the sample soaked 'Hellish Discord'. This song for all intents and purposes is an instrumental, splattered with samples. It twists and turns throughout it's five minutes, using the formula of speed into doom laden slowness. I would like to see them do more of this moving forward in what looks to be a promising career.

Although there is nothing groundbreaking on "At War With", there are enough original ideas to make Valdur one of the more formidable bands in the U.S. Black Metal scene. This is one of the best bands of this genre you have never heard. Being "underground" in the truest sense of the word, I can only hope that with this release they start to gain some of the respect they deserve.