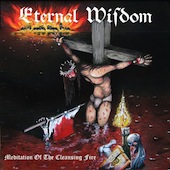 Type: Full-Length
Release Date: 2012
Label: O.T.O.W.
Genre: Black, Melodic
1 From Chaos To Cosmos
2 I Am Eternal
3 Sephiroth
4 Revelation Of A Dreaming God
5 Meditation Of The Cleansing Fire
6 The Return To Enlightenment
7 Cry For The Emptiness (Part 2)

The one man band is nothing new to black metal. However, the success of such acts varies. The most popular and successful of these would be Burzum. Varg Vikernes, at the age of 18, realized that this allows you absolute creative freedom. Varg had a feel for doing this, his energy and raw approach to his music was the perfect storm for the Norwegian black metal scene that was emerging in the early 1990's. Xasthur from California was a great one man project of depressive suicidal black metal and Host recorded everything on Taake's debut. These are the standouts, but the list would be a lot longer if I began to mention those who didn't do so well.

Enter Germany's Eternal Wisdom. Hanni, who plays all the instruments, released his second full length Meditation Of The Cleansing Fire in 2012. Right from the start you realize it's nothing new. This is pretty standard issue black metal. It's melodic, but a lot of this is lost due to it's incredibly poor production. It sounds as though he was going for a layering of the music, which if done correctly would have given this album the boost it needs. Every instrument seems mashed together and there are no drums to speak of. Where are the drums, you ask? They are there buried beneath the uninspired and unoriginal guitar riffs.

It's not all bad, there are some good songs on here. "Revelation Of A Dreaming God" is a solid song with a nice little break down into an acoustic part where you can actually hear the drums. The closer "Cry For The Emptiness (Part 2)" has an epic feel to it, that feel heartfelt and real. It's not over dramatic like most of the album. Eternal Wisdom shows some promise of a future, but until the production is fixed and some creativity can be found, it remains an album that I would only suggest for the most die hard black metal fans.