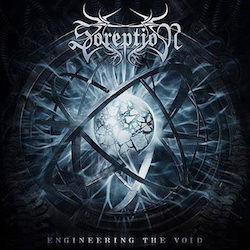 Soreption entered the world of metal in an interesting way. Illuminate The Excessive EP had numbers for track titles as if those guys put their music out there just to see if metalheads will notice. To buy that album was next to impossible. In 2008 Cube 1 released it on CD with the DVD and that's when things started to roll in the right direction. 2010 was a year when Deterioration Of Minds came out, and now in 2014 Soreption gives us Engineering The Void. I waited for that album with great impatience and I have to say that even at this time of the year Engineering The Void will end up on my Top Ten for the year.

Technical death metal can be a very tricky thing to pull off. Some bands out there go for full tech approach and create music for themselves and fellow tech musicians, where others make it more approachable and create great albums that can be enjoyed by pretty much any metalhead. Not that there is anything wrong with the first group but at some point most of those album are simply tiring, cacophonous and unlistenable. Soreption also play technical death metal, but there is a lot of elements that make their music very interesting, refreshing and even addictive. It seems Soreption figured out the necessary timing to create songs that simply crush. They are not forgetting that being technical is not all that and incorporate many chugging/slow crush breakdowns that are going to make any head bop. Guitar sound is invitingly juicy, and with the amount of riffs those guys churn out makes the listen very enjoyable. Bass sounds very thick and being very clear in the mix makes for an extra listen by itself. Drums very complex, ever changing and inhumanly mechanical amaze with mind bending precision. Vocals are guttural for the most part but there are many levels of their deepness and diverseness. How did they pull it off you ask? Well, for starters all instruments are recorded superbly. Everything is loud, clear and powerful. It gives great pleasure to listen to the music without wondering what was that sound, or what was that in the back there, or why is this or that so muddy. No problems like that found on Soreption’s Engineering The Void. All instruments sound clear as a bell and listening to it is a headbangers dream.

Out of all three Soreption releases I can't remember the time when I played the album and then turned it off after one listen. Every time I listen to those guys I feel like I'm getting recharged and resupplied with new energy. Every time I finish listening I have songs stuck in my head playing over and over. If that is not indication of a great album with great music - I don't know what is.