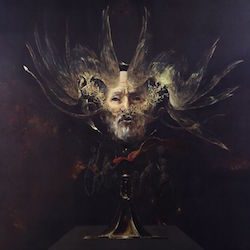 Behemoth has decided on an entirely different sound with The Satanist. Instead of the usual death metal flavor, a more black metal approach is added that can be sensed right from the first track Blow Your Trumpets Gabriel.  The songs have a decidedly slower, more evil sound to them. This isn’t to say that some passages aren’t quick, but the band has tried to achieve a more evil atmosphere by slowing things down a tad. This would be good if I was a black metal fan, but I’m generally a bigger fan of death metal and the change really struck me the wrong way.

Don’t get me wrong, there are memorable portions to this disc and the entire affair has a very strong atmosphere, but I believe the band is more exciting when in death metal mode. The blasting on the drums isn’t as severe as it was on their previous album, Evangelion and that is the album I prefer from the band. Slowing things down does signal evolution and it’s good for the band to step out of their comfort zone and try for something different. It’s only unfortunate that the black metal path is the one the band choses to tread because I would have liked to have seen them innovate more within the confines of death metal. There is a decidedly strong atmosphere to the songs on this album and it is entirely worth of the name The Satanist.

The guitars are used to build up this aura rather than bludgeon the listener and the result is an album that adds variety to the catalogue of Behemoth. I still like the band and welcome the change of direction, even if it isn’t the type of music I’d like to see them perform. I’ll take Evangelion over this album any day, though it is a fairly worthy follow-up.

I'll be the first one to admit that after listening to a single 'Blow Your Trumpets Gabriel' for a very first time I had mixed feelings about Behemoth's upcoming offering. I doubted the sound, tempo and overall direction of the band. As a single track it confused and scared me but at this same time I knew it was also taken out of context and it didn't paint the full picture of the album. At least that's what I was telling myself… All this was quickly put to rest after listening to the full album where everything started to fall or more like tumble into place and make one cohesive piece.

I really didn't want to bring Nergal's encounter with leukemia into this review but something along those 5 years since 'Evangelion' had to give. Many people though that in such tough times Nergal might convert, find god but instead he came out even more black and more dedicated in ruthless spreading of his visions and believes than ever before. With 'The Satanist' Behemoth takes a sharp turn from its death metal path and turns into an epic and majestic vein of black metal. Coincidence? I don't think so. Behemoth has realized that most powerful message is not only delivered with blast-beats and overcomplicated layers of sound… but by simplifying and slowing down they were able to deliver the most dynamic and personal, read evil, record yet. One main ingredient that makes such a difference is passion. I never doubted it on previous releases but this time it's so evident that it almost feels like we deal with a new breed of Behemoth, second coming if you will. From as always world class drumming through dynamic solos, thunderous bass lines and best vocal performance that not only ranges from roars to spoken words but is delivered with such conviction that gives 'The Satanist' breathtaking energy, we deal with something very pure and organic that is missing in todays over-compressed world.

The power and energy exuding from this record is overwhelming and what's most astounding is that Behemoth accomplished that by simplifying and letting its music breath. Layered but spacious structures create perspective of controlled chaos almost impossible to tame with its blasphemous message. From the opener to my new evil anthem 'O Father O Satan O Sun!' I find myself drawn into darkness led by Behemoth's dark master. 'The Satanist' is without a doubt Behemoth's most passionate, complex in its simplicity and powerful record to date. I call it an epic blasphemy!